Operation KTHMA: the road to Delphi 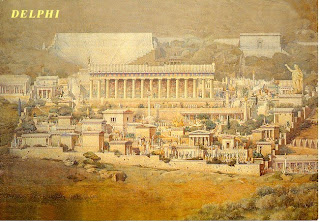 Yesterday the team made its way from Athens to Delphi by way of a series of short encounters with their new acquaintance Olorides, who turns out to be Cimon's great-nephew and thus himself a member of the Philaidai. Each night of the arduous journey, they could get one "hit" in on Olorides before Aristides, the henchman sent by Pericles to shepherd the mission, came to tell them to shut up so that no brigands (or other unfriendlies) could hear them. Olorides turned out to have a great many thoughts about what Herodotus is trying to tell the Athenians, though he was careful to make clear that these thoughts shouldn't be taken as somehow definitive.

Olorides does seem, though, to have a firm grasp on the cultural scene of Athens, and how Herodotus' innovative ideas about the role of law in human life and in the ordering of the cosmos relate to it. When the team's Athenians reached Delphi at last, and stood with Olorides by the Castalian Spring, with a clear view of the amazing wealth of the Sacred Way rising toward the enormous Temple of Apollo built by the Alcmaeonidae, becoming thus the proximate cause of Athenian democracy and Pericles' rule over it, they had a last chance to detain him and pick his brain about the meaning of Herodotus.

Aristides would take them to the temple and tell them what to do. He, Olorides, was on his way to see some people he knew.

The class-teams furiously deployed their skills, revealing that Olorides, though he disagrees with Herodotus about this, thinks that Herodotus is trying to tell the Athenians to act Greek, rather than Persian.

On the pedagogical side of things, it's becoming clear that this game-method thing is wonderfully flexible as a framework for several different kinds of learning. Judging from my students' reactions, any time I downshift into "ordinary" teaching mode, and either just start telling them things e.g. about Greek history, or tell them about course mechanics liks the upcoming Mission Final Challenge (that is, quiz), it's very much like they're reading a post in, say, a forum about The Lord of the Rings Online or even Halo, telling them how to defeat a particular boss. I'm not sure it would be an exaggeration to say that the frame of the game-space, engaging in and of itself, makes even "ordinary" teaching more engaging. Indeed, I don't think it's an exaggeration to say that students become positively grateful for that ordinary teaching that will help them get further in the game-story, in the same way I feel positively grateful, after dying multiple times, to learn the best approach to defeating a Nazgul.
Posted by Unknown at 6:05 AM