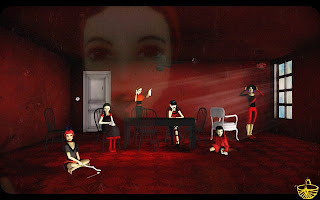 Even as Plato condemns the cave-culture-game, he expects the philosophical reader to understand that they (Plato and the reader together) are at that moment engaged in a culture-game of their own—the game called Republic. We’ll come to recognize that Republic features a next-gen logic engine and truly emergent gameplay that provides an unparalleled philosophical thrill-ride.

Republic is a game that, like 2K’s Bioshock, brings the player face to face with his or her own cultural constitution through gameplay. The most obvious example of Republic doing that—perhaps the most obvious example of any Platonic game (that is, dialogue) doing it—comes in the return of the ascended man to the cave. Indeed, as we continue, we’ll see that the philosopher’s return demonstrates just how thoroughgoing is Republic’s attempt to make the reader see him or herself as a prisoner of mimetic culture.

For in the light of the philosopher’s return, the figure of that doomed dissident, the figure of Socrates himself, pushes his arguments both forwards and backwards through the entirety of Plato’s majestic ten-book edifice.

Republic begins, after all, with Socrates telling his unknown interlocutors (that is, the interlocutors of the dialogue itself—the unnamed characters to whom Socrates is narrating the story of the cool conversation he had with Plato’s brothers et al. at the house of Cephalus: that is, us, the players of the Republic game) that it all started when he went to the feast of Bendis, a new cult where there was going to be a thrilling new ritual: a night-time torch race on horseback—such diverting games, Plato expects the reader to realize, go to make up the cave-culture game.

Republic ends at last with the massive, enigmatic myth of Er, in which none other than problem epic hero Odysseus is shown gaming the system of reincarnation, and we are expected to learn from his example to game the system of myth and mimesis. People usually don’t read the myth of Er. If you want an idea of how different Plato is from what you thought, go read it—it’s at the end of Republic 10. I’ll wait.

Republic is one big mimesis: one big game. How do we deal with that?

If we decide not to do what most platonic scholarship through the course of history has done—if we refuse simply to ignore the clues that tell us we’re supposed to understand that Republic and all Plato’s dialogues are in fact themselves mimesis--, we could still say that what Plato in fact is trying to tell us with those clues is something different, that his dialogues may look like mimesis, but really aren’t mimesis. We would lose a great deal of the irony that makes Plato wonderful instead of mind-numbing, but we would gain a philosopher who makes the kind of sense we tend to like in a guy upon whom our livelihoods depend.

We would also, however, be ignoring an absolutely crucial piece of evidence.

In the work generally acknowledged to be his last, Laws, Plato returns to the themes of Republic and once again tries to imagine an ideal city-state. In Laws, however, the role of mimesis is fundamentally different.

Athenian: And, if any of the serious poets, as they are termed, who write tragedy, come to us and say-"O strangers, may we go to your city and country or may we not, and shall we bring with us our poetry-what is your will about these matters?"-how shall we answer the divine men? I think that our answer should be as follows:-Best of strangers, we will say to them, we also according to our ability are tragic poets, and our tragedy is the best and noblest; for our whole constitution [politeia] is an identificative performance [mimesis (or what did you think?)] of the best and noblest life, which we affirm to be indeed the truest tragedy. You are poets and we are poets, both makers of the same strains, rivals and antagonists in the noblest of dramas, which true law can alone perfect, as our hope is. Do not then suppose that we shall all in a moment allow you to erect your stage in the agora, or introduce the fair voices of your actors, speaking above our own, and permit you to harangue our women and children, and the common people, about our institutions, in language other than our own, and very often the opposite of our own. For a state would be mad which gave you this licence, until the magistrates had determined whether your poetry might be recited, and was fit for publication or not. Wherefore, O ye sons and scions of the softer Muses, first of all show your songs to the magistrates, and let them compare them with our own, and if they are the same or better we will give you a chorus; but if not, then, my friends, we cannot.

“Constitution,” politeia, is a word frequently translated “republic.” It also happens to be the title of the work of the same name. I don’t think Plato could have said any more clearly that his work, whether you want to call that work “philosophy” or “dialectic” (which really just means “conversation,” for goodness’ sake) or “meta-musical mimetic,” is the same kind of thing the people in the cave are doing. It’s mimetic. It’s ludic.

It’s going to take a few posts to unpack the implications of this passage. Let me wind this one up by telegraphing the connection to games a bit more clearly.

Alright, fine--even I am willing to admit that Bioshock has received more than enough attention, so although I’m going to be talking in detail about its signal moment, the confrontation with Andrew Ryan, as I continue this series, let me say that despite Bioshock being the only mainstream game thus far that emphatically thematizes the disruption of the cave-culture-game, games are increasingly making use of their closed mimetic constitution to make at least a part of their meaning.

The example of Tale of Tales’ The Path (2009) (see also Kieron Gillen's extremely lucid review of the game), whatever we think about the game’s content (Plato’s lawmakers would, I believe, most certainly not approve) comes in nicely here. The theme of that game is arguably the inevitability of corruption, and the game uses the falsification of its own interactivity to express that theme. There is no way to avoid the wolves and yet play the game (to avoid the wolves is, precisely, not to play): to play the game is to go to meet your characters’ corruption, willingly or unwillingly. The theme itself is tragic, as opposed to philosophical, and thus precisely what Plato would seek to disqualify from enactment in the city of Laws.

The situation in Republic is much more complex and interesting. From the standpoint of Republic, The Path would seem to be disqualified not because of its theme but because of its mimetic nature. But here we come up against it, because Republic itself is mimesis—a mimesis that carries the story of how the philosopher tried to get the prisoners in the cave to turn their heads away from the shadow-puppet play, and failed. While The Path has no such grand and urgent intent, it’s nevertheless a game to be played on Plato’s new console: it makes the player perform as characters under the compulsion of mimesis. It’s an act of mimesis as Republic is an act of mimesis: both games make us sensible that, as The Matrix puts it, the world has been pulled over our eyes.