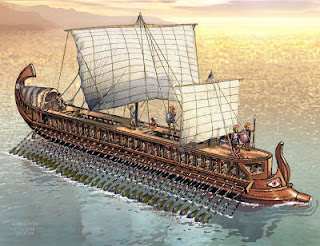 Operation KTHMA: The end of the mission, the birth of the practomimetic course, part 1—the collaborative research paper

Yesterday I debriefed the operatives about the final challenge of Mission 6, which they had just completed, having been awarded a week's extension by the Demiurge (that is, me) when I saw that things were not progressing as quickly as I'd hoped but that nevertheless the progress was very promising. This final challenge was the briefing in the form of a collaborative research paper that I mentioned at the end of my last KTHMA post. The topic for the briefing was "What is Thucydides' attitude towards Athens?" (a subject that's much more complex than the non-reader or even the cursory reader of Thucydides might think).
The operatives had a wealth of insight into how to make the assignment work better, but were nearly unanimous in their enthusiasm for the assignment itself. (Or so it seemed to me, though of course some might have been hiding daggers in their bosoms, waiting until I was safely out of grading range [I'm jesting here; I've never been more convinced of or impressed by a class' good will than I am by these operatives'].) Three of the teams have handed in papers that are collaborative (and very good indeed) from top to bottom; the other two shared sources and ideas, and I think (though I haven't waded into the depths of the papers yet) certain passages that were deemed especially felicitous.
The linchpin of this assignment is the class-team forums, where I insisted all collaboration take place. By picking through those forums, I'll be able to tell (indeed, I've been following along and so have a fairly good idea already) who did what, and grade accordingly not on the finished product but on the mastery of course objectives that their collaboration shows.
For me, this means that I can stamp "solved" on a problem I've had with the assessment of college writing since I began to teach it as a graduate student fifteen years ago: I have never had the opportunity to grade anything but a final product that is nothing but a stale exercise in trying to give the instructor what he seems to say he wants. Even with mandatory rewrites, I had no justification that would let me judge anything but what the student handed in, as a paper in fulfillment of a requirement for the course.
For classics majors, this was fine, because that stale exercise was a key part of disciplinary formation, or so I justified it to myself. But what about the students who desperately need to learn to write, but who get so, so little from learning to write a dead-end research paper containing unoriginal ideas about Thucydides?
And that's without even taking into account the absolutely enormous benefit the students derived from seeing each other work. Some of the students in this class are in fact very talented writers of research papers who may well go on to academic careers in which they put that skill to good use in producing new knowledge. The students who don't fall into that category had never, I'm fairly sure, had the opportunity to see that kind of student at work. I don't think I'm reading too much into the posts I saw in the class-team forums when I say that many of them found it truly eye-opening.
Did this assignment or its evident success have anything to do with the practomime of the course's framework?
("Practomime" is a word I'm audtioning to substitute for "game." Fear not: if it passes the audition I'll explain it further, and quite likely will never shut up about it either.)
While I would certainly recommend this kind of collaborative paper in any course, I think its success in this practomimetic course had a great deal to do with two elements that are unique to the practomime:
Over the next week or three I'll be adding to this post mortem series about Operation KTHMA. Next up (I think): the KTHMA team stands trial for hubris.
Posted by Unknown at 9:25 AM