On Wednesday, I get to play-test the beginning of a practomime towards which I've been working for nearly a year now: what I have a feeling, if it catches on, may well be called "The Latin Game" (that's what my daughter calls it anyway, and she's been my only real play-tester all these months).
I call it, among other things, "A practomimetic introduction to Roman culture through the Latin language." It's an RPG--a tabletop RPG at the moment, but with dreams of going digital some day. It's about a possibly-mythical, possibly-real object called the Lapis Saeculorum (Stone of Ages), which bears an inscription that the students have been recruited to decipher.
In order to do that they must:
Otherwise, you know, the world ends.
Wednesday is the Classical Association of Connecticut's State Latin Day, an amazing occasion when north of a thousand Latin students wear their tunicae (they can't have the fun otherwise) and run around a camp-like setting that has, of course, a piscina. I've been going faithfully for the last few years with my XBox or laptop in tow, trying to spread the word that games are not the devil, especially when viewed through classics.
The students, taking time away from such things as sunning themselves and racing chariots, have always been appreciative (and they have to do a certain number of enriching things over the course of their day, so being able to use video games for that purpose seems appealing, I imagine). But I've always seen a sort of longing in their eyes: "Isn't there a way," their eyes say, "that we could actually play games to learn Latin?"
"Ita vero, Marce, est ludus Latinus."
Six Romans, played by any number of Latin students in a team format, arrive on a road outside Pompeii, where a group of brigands is looking menacingly into a tree.
Six Romans, cousins--but each with a distinct worldview and a distinct set of skills. Three young women and three young men. One admires the Republic, another the Caesars; a third just wants peace. One knows of the power of Rome's legions; another of the power of the ancient cultural heritage that has come to Rome from the Greek world. Each has a different ars linguae ("speech skill") with which to start, and will gain more artes as the students level him or her up.
Six Romans who may have very different ideas about the empire and the old republic, but who must work together through the Demiurge's Texto-Spatio-Temporal Transport System to carry out the mission of OPERATION LAPIS SAECULORUM.
Some of my co-conspirators and I are working on this practomime on Google Wave, along with a similar practomime for Ancient Greek that will embed the first levels of that language in my large lecture courses on Greek Civilization and Classical Mythology. If you'd like to come along and help reimagine classics learning, let me know!
Posted by Unknown at 6:16 AM

This is just a pointer to my latest update on LOTROreporter, in which I chronicle my students' rescue of their bardic leader from a (fictional) camp of 1337 (that is, leet; that is, "elite") gamers.
Posted by Unknown at 6:59 AM

How much fun is virtual edutainment? 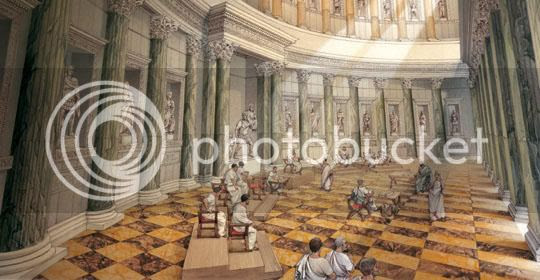 This is an entry in a fun and interesting challenge sponsored by The Ancient World in London, presented by the energetic and classically-minded folks at Heritage Key.

I want to say that virtual edutainment is a lot of fun, but only if it's designed not to be fun but to help learners tell a story—that is, if fun isn't the primary consideration. My thinking on the subject has evolved enormously over the past year, as I've been developing a game-like way of delivering my own courses in classics. This past Fall I gave a course on the Greek historians as a role-playing game; this spring I'm teaching Advanced Latin as an adventure with the poet Ovid in 8 CE Rome.

Because I don't have the resources at my university to develop 3D worlds within which my students can go to ancient Athens and ancient Rome, I've been running my practomimes, as I call them, as old-fashioned tabletop RPG's and as online text-adventure with a few illustrations, like the one above of the Forum of Augustus.

I've learned that the virtual worlds that we create in students' imaginations can be learning tools just as powerful as the immersive environment of an MMORPG. Of course, my students do get to do their share of fighting, since fighting was so crucial to the cultures within which classical literature developed—but the most exciting parts for them have been meeting Pericles, Sophocles, and Augustus, and being able to "see" in their imaginations, what the ancient world looked like.

In Operation KTHMA, the course on Herodotus and Thucydides, my students stood trial for breaking and entering the home of Pericles' rival Thucydides son of Melesias. In FABULA AMORIS ROMANI, my students had to sing for Augustus, first emperor of Rome. In these moments, fun is being had—I have video of some of these moments, and there are actual smiles on my students' faces!—but fun isn't the thing that matters most. What matters is engagement in the material, and, if they're to be believed in their comments on the course at the end of the semester, my students were engaged. In (Gaming) Homer, my students are caught up in an ARG where they must become homeric bards by observing and playing The Lord of the Rings Online in relation to the Iliad and the Odyssey.

How much more wonderful would these courses be if the students could also be there in a 3d rendering? Fun, yes—but if the narrative were well-designed, also a course of study that's just as engaging as World of Warcraft. It's not the fun, it's the immersion, whether that immersion is high-tech, low-tech, or somewhere in between.
Posted by Unknown at 6:02 AM