Over the next year, I'm going to have the pleasure of developing an online version of the course I've always considered my favorite to teach: CAMS 1101 Greek Civilization, in which I get to tell my students the amazing story of how Western Civilization discovered the questions that still obsess us--above all, the question of ἀρετή arete ("excellence"). Simply put, that question is more or less just "What does it mean to be a good person?"
Now, though, I get to design it as a practomime from the ground up, and I think I've just had a wonderful idea for the framing:

The Demiurge recruits the students as operatives in Project ΑΡΧΑΙΑ in the usual way (cryptic e-mails on the course's web-site saying that their services have been commandeered to save Western Civilization yada yada yada). In order to reach the mission objectives of knowledge and skill necessary to brief the world about Greek cvilization (including sub-objectives of reading ancient Greek), the Demiurge has coded the following practomimetic simulation into the TSTT:

It's the lead-up to the trial of Socrates, and operatives are inserted into Athenians who could be called on to be jurors. In order to make the best possible decision about his guilt and his penalty, they must learn everything they can about how Socrates ended up on trial (which is, when told correctly, a story that goes back to the Bronze Age), and what the consequences of the trial have been for Western Civilization.

Operatives travel via the TSTT to the agora of Athens in the spring of 399BCE. They must find the answers to the questions put to them by the Demiurge and brief him on those answers, questions like, "What does Achilles mean to Athens?"
In order to complete this task (here's where the "activities" and "assessments" come in): they must gain certification on the TSTT through Challenges in the form of multiple-choice quizzes; they must heighten their particular skills through Ancient/Modern-Interweave Skill-Practice Exercises (AMISPE's); they must power-up the TSTT through Imaginative Text Analysis (ITA), including reference to features of the ancient Greek that demands developing skill in reading that language; they must carry-out Practomime once in the Demiurge's TSTT-simulation, and provide him with Briefings (in disguise as exam essays).
Oh, and did I mention they're going to have to learn the beginning level of ancient Greek to do that?
Thinking about the coming design process energizes me in a way that I have to say nothing else in my professional life ever has: the lessons learned from ΚΤΗΜΑ, FABULA AMORIS, and ΚΛΕΟΣ are going to let me have a real go at convincing the world that game-based learning is a fantastic way to teach anything. And as a special bonus, my students and I are going to engage this world-beating material more deeply and immersively than we ever have before.
Posted by Unknown at 7:18 AM

Red Dead Redemption diary, day 2: in which character and practomime seem to have a cage-match, or, *yawn* cutscenes again 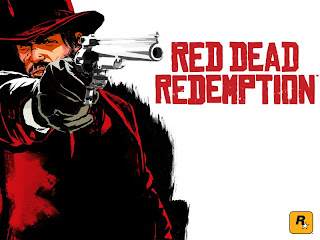 It's not often that I get to play a game in synch with the rest of the gaming world—that is, when the game releases—and most of the time I consider that a good thing, because it means that like a good little scholar I get to absorb the critical context along with the work. I also get to take my time when I play a game late, and avoid the unpleasant realization of just how "bad" I am at games. (Oh, how little consolation it is that I'm "good" at, say, the Iliad.)

But with the start of summer coinciding with the release of Rockstar's Red Dead Redemption, and with my longstanding interest in the relation of the Western to the epic tradition (I teach the Iliad in my myth course with The Searchers as my opening gambit), I thought it might be fun to blog on a semi-regular basis in a sort of diary-commentary form. Here goes.

And that, of course, is where Plato comes in. What will Red Dead Redemption allow its players to learn about the West, and more importantly about themselves? What will those players be, after they have been John Marston? Despite the frustrations I'll bring up as we go, I think even I will emerge transformed by the beautiful and profound aspects of this practomime.