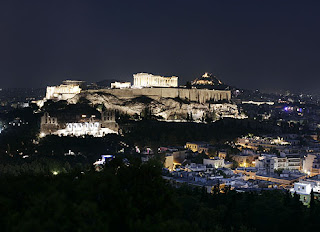 See this hub for a guide to my posts on Operation KTHMA.
One of the students said something at the end of class on Friday that I don't think I've ever heard a student say before, especially not on a Friday: "Can we keep going for another hour?" He wasn't more than half-serious, to be sure, but I felt I wasn't too far off in taking it as a compliment to the course, especially since matters had just reached a crescendo in their encounter with the (fictional) wife of Thucydides son of Melesias (sM), whom I called Aidonice.
Taking my cue from moments I have found very meaningful in video games in which a player-character receives unavoidable, massive damage, I had Aidonice say "You all should not be so confident that working for Pericles is in your best interest. We know your secrets." Then she turned to each of the class-teams and revealed what must have felt to the students like very large parts of their secrets. (I'm reasonably sure that in actual fact the teams are still a good distance away from guessing each other's secrets even after Aidonice's critical hits.)
This occurred at the end of the encounter, after the students had managed to infiltrate Thucydides (sM)'s house (though not without raising an alarm, which proved crucial as the situation developed). Aidonice had come down from the women's quarters and led them into the andron, where she had whirled and launched a surprise attack, accusing the students of undermining the peace of Athens, and claiming that her husband had nothing to do with the stories being spread by Herodotus.
It transpired in the encounter that that wasn't quite true, because Herodotus had (this is my own fictionalization) sought a meeting with Thucydides son of Melesias, for reasons that neither Aidonice nor Thucydides himself understood. So Thucydides (sM) did know that Herodotus was spreading stories against the Alcmaeonidae, Pericles' family, and Pericles' political faction, but continued to profess ignorance of Herodotus' motives. (The whole encounter was punctuated by extensive "text-time" interludes in which we zoomed through the essential Herodotean passages about aristocratic and tyrannical influences on human events.) Friday's session ended there.
On Monday, she made the teams an offer: they may send her a message at any time and seek the protection of the Philaedae (the family of Miltiades, Cimon, and Thucydides (sM)), and join with the aristocratic faction to attempt to keep the peace with Sparta. Otherwise, the aristocratic faction will come down as hard on them as they know how, and Pericles might well not be able to save them.
I told the students to talk about it in their team-forums. Over the last couple days, they've been making their choices, between Philaedae and Alcmaeonidae, and, as I hoped, not all of them have chosen the same way. I'm delighted above all because with my new understanding of the HoneyComb Engine I very much want to end the course with the students demonstrating their mastery of important course objectives by taking the active part in the storytelling around which Corvus bases some eseential components of the system.
Yesterday, the mission finished with a big set-piece I had dreamt up on the treadmill. Thucydides (sM) appeared with many of his henchmen. Aidonice told him what had happened, and he told his henchmen to arrest the students' characters. One class-team had the wit to try to use a new skill of command to get the henchman to stop in their tracks, but there turned out simply to be too many to stop.
At the moment when the student-characters were about to be arrested, though, a strange sound was heard. I always delight in describing the music of the aulos as resembling the most annoying bagpipe imaginable, and so I imitated this sound for humorous effect as the henchmen and Thucydides (sM) went out into the courtyard to see what was happening. The student-characters followed, and they saw many more torches approaching down the street than Thucydides' henchmen had, and heard the sound of the aulos coming closer.
Thucydides (sM) muttered, "Oh my gods, you're kidding me."
An enormous party of sailors arrived, led by the students' friend Aristides and a man about their age whom they hadn't seen before, playing the aulos and looking ridiculous.
Thucydides (sM) said, "Alcibiades, of course. What other self-respecting person would walk down the street playing the aulos."
Alcibiades removed the aulos from his mouth and said, with a grand gesture, "At your service."
Aristides beckoned to the student-characters and said, "Pericles is waiting for you!"
To some of the teams' surprise, certain other of the teams were a little reluctant to go, but in the end they followed along. Before they left, Alcibiades nodded to the shadows, where the student-characters now noticed another young man, also about their age or a little older. "Are you coming, Olorides?" asked Alcibiades.
The young man nodded, a bit indecisively, and looked at Thucydides (sM), who said, "Do as you must, Olorides." Olorides went to the side of Alcibiades, Aristides, and the student-characters, and walked with them, as, accompanied by Pericles' faithful, they at last escaped (or were taken unwillingly away from) the leader of the Philaedae.
Posted by Unknown at 5:29 AM