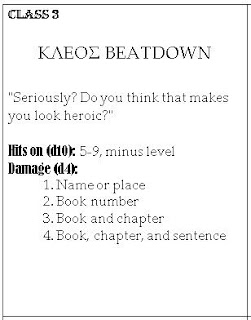 See this hub for a guide to my posts on Operation KTHMA.
The boss-fight with the High Priest of Apollo at Delphi delivered the information I was hoping my students would get about how Delphi actually worked, according to what I think is our best evidence. (That is, it was rather like Switzerland, banks included, and with a girl on a tripod substituting for the magical power of Swiss Chocolate.)
But it also crystallized a problem with the logagonistic system that I've been avoiding: as it has stood hitherto, it's not interactive enough. The basic idea is that students discover the information that they need both for the game and for the course above all by deploying skills (a la weapons and spells in traditional RPG's both paper-and-dice and digital). When they deploy a skill, as the Demiurge I tell them what their character is saying and how their "target" (that is, interlocutor) responds.
That is, it ends up being a roundabout way to lecture, in which the top-down nature of lecturing becomes starkly, even absurdly apparent. Not un-engaging, I think, because I always try to make my descriptions and presentations of the information entertainingly goofy and iconoclastic, but definitely not as engaging as I want Operation KTHMA and the other courses I hope to base on it to be.
As I lamented this defect a bit, one of the few students who's truly both an experienced gamer and an experienced classicist nudged me along the path I've been trying to travel—the path of text. You may remember that the basic nature of the gameplay already has a healthy helping of textual analysis in it: each mission-part begins with a session in which the teams use their skills in reverse, analyzing a key section of Herodotus or Thucydides to "power-up" the transport device that sends them back in time. That "power-up" phase is without a doubt the most successful part of the course thus far, in my opinion (though the multimedia team skill-practice exercises are a close second): the power-up is the time when it really does feel like we're making the ancient world come alive.
What if somehow the logagonistic (that is, "combat") system were a real continuation of that textuality? The difficulty I saw was that I wanted the students to practice analyzing the text, but the point of skills in RPG's is that they function as a clever metonymy to cover over a player's lack of real skill in, say, sorcery.
That's when I got out the card-stock and the glue (which I borrowed from my kids' craft box and which, hilariously, turned out to be sparkle glue), and made the skill-cards. One of those cards is pictured above.
Skills, you see, seem to me to tend to teach a player about his or her class, and, by observing other players playing other classes, about those other classes. Their rule-based existence teaches players not how to cast a spell or swing an axe, but how to be a loremaster or a champion—at least insofar as the designers of the game have managed to encode in that rule-based existence some nugget of their idea of what those classes are. To that end, I realized that it's not what the skills do that matters for the teaching aspect of the course, but what they mean.
The reason for the cards is first that I want to see if standardizing the skills brings their basic point across better—the point being that these are discursive techniques that various ancient Greek cultural figures used. Second, the cards will be an easy way to simplify the mechanic of the expense of character-energy—each team has three cards for their basic skill, two cards for their second-tier skill, and one for their third-tier skill; as they play them on a given mission, the cards are put in a discard pile.
Third, though, and probably most importantly, standardizing the skills this way allows me to introduce a new framework for the discovery of the secrets in logagonistics—both the NPC and the PC secrets. From now on, I'm going to formulate each secret as a declaratory statement with discrete elements, and tie each of those elements to a passage that the character-skills can discover.
For example, the secret the operatives discovered from the High Priest of Apollo was "Delphi seeks to remain neutral." If we had been playing under the new system, I would have broken the statement into four parts: "(a) Delphi (b) seeks (c) to remain (d) neutral." For each of those parts I would have assigned a particular sentence in one of the important texts (not just Herodotus and Thucydides, but also homeric epic, tragedy, Aristophanes, and Plato—all instantly available on the internet, to be projected on the screen in the classroom). For example, I might tie "Delphi" to the moment in Sophocles' Oedipus Turannos when Oedipus tells the chorus that he has sent Creon to Delphi. Ideally each "damage-passage" would have some sort of thematic relationship to the secret itself (as the Sophocles passage does), but that's not really necessary: the idea is that the students will have to find the passage first and then identify the key-word that forms part of the secret.
You can probably guess where my high hopes for this new version of the system lie: not only will the students be closer to the text at all times, but opportunities open up for texturing their idea of what Athens was like with a wealth of different material, and for texturing their knowledge of the texts of Athenian culture with a new idea of Athens. I'll keep you posted.
Posted by Unknown at 7:18 AM