The Interactivity of the Homerids (2): in medias res 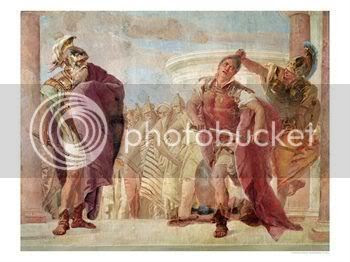 This is how the Iliad kicks off:

Sing, goddess, the accursed wrath of Peleus’s son Achilles,
that hurled many strong souls of heroes down to Hades’,
and made them food for dogs and all the birds,
and the will of Zeus was accomplished:
from the time when first stood quarrelling
the son of Atreus lord of men and godlike Achilles.
Which of the gods set them to battle?
The son of Zeus and Leto, for angered at the king
he sent an evil sickness on the army, and the people were dying,
because the son of Atreus dishonored the prayer-man Chryses.
For that man came to the swift ships of the Achaians
to ransom his daughter and to bring countless payment. . .

You’ll notice that this epic beginning has two spearate parts—first, what’s usually called the “proem” (“proem” is just a fancy word for an introduction in a poem) in which the singer of the epic talks a bit about what he’s doing (specifically in relation to his imagined function as a sort of mouthpiece for the muses—that’s the “Sing, goddess” part), and then, second, the real beginning of the story, when Chryses, the priest of Apollo, walks into the Achaean camp. It’s that second part that’s called the beginning in medias res: instead of telling us the whole story of the Trojan War from the very beginning, the bard (he’s the guy singing the epic when it was in its original form some time between 1200 BCE and 800 BCE; remember that a very nice definition for “bard” is “singer of tales”) starts the story with a minor incident, though that minor incident will soon become a major problem for the Achaean army that’s trying to capture Troy and get Menelaus’ wife Helen back.

I’ve got a bit more to say about what’s going on in the beginnings of the ancient epics, but I want to clarify the kind of comparison I’m making with the beginning of Halo (and also with the beginnings of just about any other adventure video-game you can think of, whether it’s Star Wars: Knights of the Old Republic or The Elder Scrolls IV: Oblivion or Grand Theft Auto IV): just like ancient epics, adventure videogames start in the middle of the story. Halo starts when the Pillar of Autumn has just made a desperate hyperspace jump to elude pursuit; Prince of Persia starts in the middle of a desperate battle.

The reason we even have that phrase, in medias res, is that the ancient literary critics noticed that the Homeric Odyssey and Iliad didn’t start at the very beginning of a story, the way your typical folktale, and, really, most novels do, with “Once upon a time” or its equivalent—something like “It is a truth universally acknowledged” or “All happy families are the same,” or even, “Call me Ishmael.” No, epics begin (after that front-matter, called the proem, which features an invocation of a Muse or something like a Muse, where the epic singer asks the divine spirit of poetry to tell the story for him, which is a bit like the moment when you see the big “Bungie” logo on your TV screen, and then the game menu, which says, in effect, “Yes, you’re playing a video game—that video game was made by our cool studio—now it’s time to press a button to get it started”) in the middle of the story. The Iliad starts when the Trojan war is already ten years old. The Odyssey starts when Odysseus has been gone for twenty years, and is finally on the verge of coming home. The Aeneid starts when Aeneas has been journeying for two years already, and thinks he has almost made it to Italy, his final destination.

Halo starts when the Pillar of Autumn has already been fighting a war with the Covenant for quite some time. The action of Halo, and of Halo 2, and of Halo 3, all takes place within a story that the audience is made to feel happens in the middle.

In the middle of what? What’s the point of an in medias res beginning? More importantly, what effect does it have on the audience, and can it tell us anything about a possible similarity between video games and ancient epic? Beginning in medias res doesn’t mean that the epic will fail to tell a complete, discrete story. It means, though, that the epic’s individual, particular story taps into a much larger story, of which it constitutes only a small part. An in medias res beginning makes the audience feel that the story they are to hear, or rather, as we’ll see, to participate in telling, whether we’re talking about ancient epic or about Halo, is part of something bigger—indeed, a story that started at the beginning of the world, and will continue unto world’s end.

Next time: our name for in medias res: immersion!