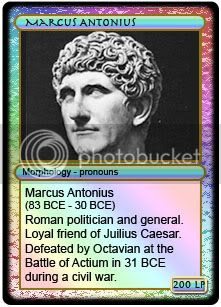 I'm incredibly excited to let my readers know that the first-ever fully practomimetic introductory language course, Operation LAPIS, is about to launch. (ĪTE means “Go,” by the way.) Operation LAPIS will be running this school year both here at UConn and at Norwich Free Academy, under the able command of Karen Zook (UConn) and Kevin Ballestrini (NFA) as Demiurges. We've been working all summer on designing the practomime and getting the materials together, including most recently a wonderful set of CARDs (Classical-Attunement Reward Devices) like this one, which will be awarded to students for collecting examples of pronouns (for more information about the CARDs in particular, see this post by Kevin.)

I'll let the Demiurge himself introduce the premise:

Congratulations, recruit. The Demiurge has selected you as an operative in Operation LAPIS. The Demiurge wishes to express his hope that you will prove an asset to the operation, and to Project ARKHAIA as a whole. He also wishes to explain your mission.

Project ARKHAIA is a secret initiatve of the Demiurge to preserve and build up civilization by identifying and interpreting the key cultural practices and works of the ancient world. The project is divided into several different missions, including Operation LAPIS.

The essential mechanic of all the operations of Project ARKHAIA is to recruit students as operatives of a system called the Texto-Spatio-Temporal Transmitter (TSTT). You may think of the TSTT as a supercomputer running advanced artificially-intelligent simulation software, or you may think of it as a time-machine. Either way, the TSTT has been programmed by the Demiurge to take mission operatives back to the ancient world. There, they collaborate with other operatives to control ancient Greeks and Romans tasked with discovering the secrets that can save our own world. Inside the TSTT, operatives learn to act as Greeks and Romans, and in particular to understand their languages, ancient Greek and Latin.

These secrets are encoded in the TSTT in the form of texts which operatives must read and understand. Of course, in order to read and understand them, operatives must learn the languages and cultures of the ancient world. Without that leaning, the secret texts would be meaningless. The secret text of Operation LAPIS is the LAPIS SAECULORUM (“Stone of Ages”). Your mission, recruit--operative, now--is to discover what the LAPIS is, and where you can find it.

As you progress in your attunement to the TSTT and the classical world, you will receive Latinity Points, which will eventually be disguised as your grade in order to maintain operational secrecy. You and your team will control a Recentius--one member of an ancient family--alongside the Recentii of other teams. You will gain levels of attunement, and gain the ability to decide your Roman’s destiny even as you learn more about that Roman’s story. You will collect the essential elements of the Latin language and the Roman culture, and receive special Classical-Attunement Reward Devices (CARDs) to indicate your progress. Above all, you will discover the secrets of the men and women of ancient Rome who shaped the destiny of the entire world: tradesmen, bankers, matrons, senators, courtesans, emperors.

The Demiurge has recruited you to achieve no less a task than to save civilization, but the path you and your team will take will be your own.

The course, that is, is framed as an RPG inside an ARG. The operatives (students), divided into five teams, each of which controls a young Roman, must go to ancient Pompeii and answer prompts like this one:

Your Recentius is standing, on a bright Italian summer day, on a road near the slopes of Mount Vesuvius. Refer to the TSTT navigation device for geographic orientation.

There is a field nearby, with an olive tree in it.

Prompt: Answer the ruffian; you are not required to tell him your actual nomen.

Over the next few weeks, I'll be blogging much more about the mechanics of LAPIS, and about the way we're trying to assess its affordances for engaged learning. We have an amazing, and growing, team working on the operation, and we can't wait to see what paths Karen’s and Kevin’s students choose.
Posted by Unknown at 7:28 AM