The mechanic of a heads-up display, usually called a "HUD," is well known to players of a wide variety of different kinds of games. Probably the most familiar kind of HUD for most gamers is the one found in games with a shooting component: the overlay of various important pieces information on the picture of the virtual world in which your character is trying to complete his or her objectives. Two of those pieces of information are nearly universal: a targetting reticle (the little shape in the middle of the screen that tells you where your firearm will deliver its projectile) and some kind of health-bar (the indicator of how much more damage your character can take before he or she reaches some kind of failure state—most often analogous to death).

Learning to manipulate the HUD of an FPS or an RPG is perhaps the most basic objective of games that have such a mechanic. After all, if you can't use the information in the HUD effectively, you won't achieve any other game objective. Games have become very good at teaching players—that is, creating the opportunity for players to learn—how to use their HUD's through simple game-opening tutorials, but the reason they've been able to get so good at it is that basic nature of the mechanic, like all game-mechanics, is itself an opportunity to learn. The reason experienced gamers can pick up a huge variety of games and play them almost right away is that through game after game they've learned the HUD mechanic by doing things in games with HUD's. In that sense, the HUD is a kind of microcosm of the potential of game-based learning.

What if learning how to read Latin were like learning to use a HUD? What if the information overlaid on the screen were information about the grammatical and cultural aspects of an ancient situation, to respond to which a student had to interpret and assimilate that information? 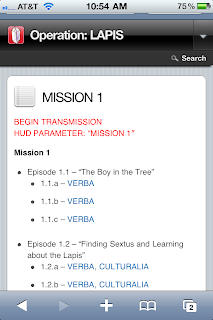 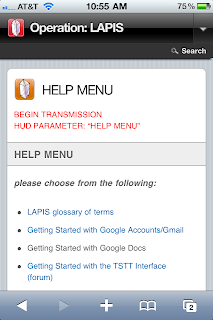 LAPIS operatives, as we've discussed in previous posts, will find themselves in ancient situations that demand that they read Latin and respond like Romans and in accordance with the worldview of their characters. To assist them, in the same way that a health-bar assists a gamer playing, say, Halo, they will have a HUD that contains vocabulary, grammar notes, and cultural information—including multimedia and links to places to obtain more information. They will absolutely need to use the information in their HUD's to contribute effectively to the team collaborations where they will be assessed on their progress towards mission objectives. Remember that teams of students control a single Recentius (player-character), and that they will need to collaborate on what action to take in response to the prompts they receive from the TSTT.

From the pictures you can see that we envision the HUD being displayed on mobile devices. To marry the ARG aspect of LAPIS to students' actual lived experience with the technologies of everyday digital culture by sending them information vital to their mission on their handheld devices—well, you can just call it potentially engaging. The same information could also be displayed in a browser tab, though, so students will have multiple ways to access their HUDs. 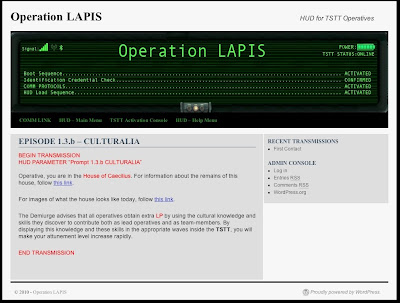 "Student-centered learning" is a term that gets thrown around a lot. The HUD may be the best mechanic I've ever seen for letting players and students keep the learning centered on them. At the same time, the HUD mechanic shows clearly a fundamental relationship between game mechanics and learning activities: in a game, as in LAPIS, a player manipulates information given by the game to reach objectives. The mode of manipulation is a mechanic; the process of reaching the objective is an activity. Thus, in a traditional course, one could describe using a glossary as a mechanic; in fact, the LAPIS HUD is in a certain sense a glorified glossary. If there's a breakthrough here, it's in the way the mechanic is integrated into the activities and learning objectives of the course: whereas a traditional glossary has no integral relation to what students are doing when reading Latin (that is, to look up a word in the glossary isn't actually a part of reading but rather takes students out of that activity and into the glossary), using the HUD is explicitly a part of the ongoing narrative of Operation LAPIS. When students use the HUD, they will be working towards their real learning objective—not just decoding the words of a passage of Latin, but performing as a reader of Latin.

By integrating the scaffolding of the HUD into the overall practomime of LAPIS, we believe that we've given students a way to engage the material of introductory Latin—grammatical and cultural—on a very deep level. More, the basic activities involved in achieving mastery of this material are made part, as they should always be made part for the scholar as well as the student, of the greater quest for the highest goals of humanistic learning: preserving and improving our civilization. That’s why the Demiurge has recruited them, after all; that’s what they’ll do if they manage to play through all the operation’s missions and at last find and read the LAPIS SAECULORUM.
Posted by Unknown at 8:08 AM