A note on the word "practomime" 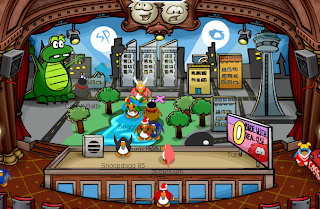 I'd like to express my thanks to Charles Pratt, a wonderful sparring partner ιn such matters, for discussing this subject with me in the Google wave that led to this post; if you'd like access to that Wave, let me know in the comments.

If my work should continue in the direction I think it's going, you're going to see me use the word "practomime" with increasing frequency. Essentially, I mean by it exactly what I meant by "performative play practice" (PPP). Practomime is what games and stories have in common—playing pretend in a context where everyone agrees that playing pretend is what you do. I'm seeking to replace my own reflexive use of the word "game" with "practomime" in any context where I consider it important to bring the performative element of the practice to the fore. I made the word from two authentic Greek roots, πράττω (pratto: do, act—the word that of course gives us πράξις praxis, which is what Aristotle says tragedy enacts) and that all-time fave of mine μίμησις (mimesis: performance-as [often misleadingly translated "imitation"]—this is what Plato and Aristotle say tragedy is), so I think it's sturdy enough for my purposes, at least.

As I try to figure out what the things people call games are doing and what they can do, I increasingly feel the need to make the connection to mimesis (see this post for a bit more detail). For my own purposes, I need a term that captures certain connections that I have proven to my own satisfaction at least to be fundamental. That doesn't mean I think those connections are by any means exhaustive, and I still think it makes sense at the very least to talk about "game elements" in what I'm relabelling, for my own purpose, "practomimes."

But the category of human experience that's being touched on in these practomimes is so far beyond the semantic range of "game," as I see it, that for me a new term is necessary. That new term needs to capture the greater depth of "games'" aesthetic relationship to Hamlet than to Monopoly. Note that I'm not saying that they're not fundamentally related to both those things.

Consider New Super Mario Bros Wii, which I'm finding, with my aged reflexes, fiendishly difficult. "Is this really a practomime?" I have said to myself, as whatever exiguous story there is in the game faded into the far background to reveal the stark horror of failing over and over to make a particular jump. "Yes," I thought to myself, "but just as calling DragonAge a game doesn't get me anywhere interesting and can in fact serve to impede my critical progress, calling NSMBW a practomime doesn't capture what's most interesting about the game."

On the other hand, I do think it's fascinating, from a practomimetic perspective, that NSMBW is, like a re-composition of the oral epic tradition, a virtuosic variation on what's near-exactly the same story in so many earlier games. That's the sort of thing that for me simply can't be discussed with any degree of facility if we call it a game. But the critical language I'd use might be something like "As a practomime, NSMBW possesses several interesting features that tend to be obscured by the understandable tendency of most critics to frame it primarily as a game."
Posted by Unknown at 6:17 AM