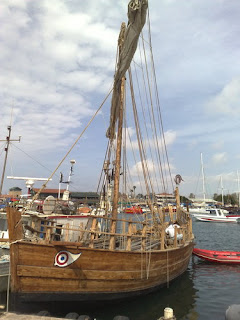 I'm deep in the midst of planning not one but two more practomimetic courses for the semester that begins (gulp) in less than two weeks (I'll be posting some key documents soon from the one that's not top secret and ARG-y), but I do want to finish the KTHMA story in at least a skeletal fashion.

Under cover of darkness, the team landed on the beach at Methone, accompanied by Herodotus, Thucydides, and Alcibiades. They observed that there were two conveniently located beacons: one that would alert the Athenian ships to land and disembark their 1000 hoplites to take the town; another that would alert the Spartans further inland that Methone was under attack.

Team 2 rolled a nine, to their delight, when it was time to get off the fishing boat that had been commandeered to take them in to shore, and thus disembarked in style. The whole mission team successfully gathered the available intelligence, which indicated that the wall of Methone was undefended. One of the pro-Pericles teams lit the beacon that alerted the Athenian ships, and they heard a horn-call as the troop transports headed on-shore.

At that point, things became confused, as the fog of war descended. One of the pro-Spartan teams apparently forgot that there was a conveniently placed beacon to alert the Spartans, and decided instead to tip over the coastal beacon in hope of starting a fire big enough to attract Spartan attention. They were quite successful, and much of Methone went up in flames, attracting the attention of Brasidas, greatest general of the Spartans, who actually does enter Thucydides at this point.

Unfortunately, the fire also allowed the Methonians to surround the team.

I rolled a die. "There are no survivors," I reported.

"But," I continued, "Herodotus, Thucydides, and Alcibiades step from the shadows, evade the flames, and manage to get your bodies back to the beach, where they take ship for Athens and are thus among the dead of the first year of the war. . ."

I have videotape of this moment. There is something on the audio that sounds like a gasp. I'm sure it's not actually a gasp, but a prof can dream.

". . . over whom Pericles delivers the funeral oration."

To call this course the most rewarding experience of my teaching career thus far would be true, but wouldn't capture the feeling of rightness I've had about it since I first started to dream in this direction, and the change of register it's involved in my thoughts about the entire educational enterprise. It didn't all go particularly well, but so much of it was so extraordinary that I can't imagine the experience failing to transform every class I teach from here on.

My thanks to you for reading these precis, with the hope that I'll have more to share in very short order, as this adventure continues.
Posted by Unknown at 5:12 AM