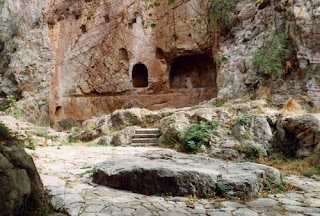 SPOILER WARNING: If you are enrolled in CAMS 3212, I recommend that you read this post after the course is over.

I want to see if I can get into writing the theoretical construct behind the premise of Operation KTHMA. That premise is that an omnipotent figure, whom I’m calling the “Demiurge”--invoking Plato’s idea in the Timaeus of a craftsman (δημιοῦργος) who created the universe--, has disguised himself as me, and is recruiting my students for a mission. The Demiurge will help them use the writings of the Greek historians Herodotus and Thucydides (that is, the reading for the course) to travel to ancient Athens. There, they will try to strengthen Western civlization by helping to spread an understanding of what Herodotus and Thucydides were trying to say (that is, they will demonstrate that they have achieved the course objectives).

One reason I think this fictional premise will work as a way to achieve the course’s goals and objectives is obviously that it will engage the students in activities that will prove to be inherently more interesting and stimulating than more traditional course activities. But I also have another, more important reason, for attempting this project. I believe that the practice and writing of Herodotus and Thucydides are inherently ludic. I want to get my students to see that what Herodotus and Thucydides were doing has a kinship with games, and that if we can train ourselves to see historical writing that way, we will understand it, our world, and ourselves better. I want to help them practice a ludic analysis of ludic practices.

Just as I have tended to in this course in the past, I could spend a long time talking theoretically here on this blog about the transformations in the Athenian attitude towards the past over the course of the sixth and fifth centuries BCE reflected in the transition from homeric epic to the mixture of tragedy, Herodotean historie, Thucydidean suggraphe, and finally Plato’s critique of the myth-focused Athenian culture. The task of showing what I mean by “practicing a ludic analysis of ludic practices” is probably much better served by way of example, though.

Herodotus is probably, on a word-for-word basis, the most digressive author previous to Laurence Sterne. What I count as the very first of these digressions begins in the second paragraph of his historie, where he commences an account of what the Persian storytellers say about how the trouble started between Greece and Persia. Scholars have differing opinions about whether Herodotus is actually relying here on real Persian stories, or is rather putting words in the mouths of the Persians; I tend towards the latter opinion. What’s really important, however, is that these stories that Herodotus attributes to the Persians are rationalized versions of Greek myths. The first of them is the story of Io, told as an abduction of a princess by Phoenician merchants. This way of looking at the traditional stories of the dealings of the Olympian gods with mortals will later be called Euhemerism, after the Hellenistic scholar Euhemerus, who did a bunch of it.

From my perspective, Herodotus here begins playing his audience’s notions of the past like a game, and he never stops. He benefits greatly, as does Thucydides in his own way, from the cultural context in which he practices his inquiry (the literal meaning of historie, a word Herodotus uses in his very first sentence), in which the dominant way of relating to the past is through the epics of Homer. I’ve spent a lot of time here already showing that homeric epic is essentially ludic; with that idea in mind it’s a small step to see that Herodotus is playing the bards’ game a different way.

Just as the homeric bards could make up for example an encounter between Odysseus and Achilles in the underworld, Herodotus can make up new versions of the stories of Io, Medea, and Europa. To understand Herodotus this way is to understand something vital about Athenian culture in the middle of the 5th Century BCE, when one kind of ludic relationship with the past was giving way to another. Indeed, the difference between Herodotus and Thucydides itself perfectly embodies the shift. Because he is consciously practicing against Herodotus, Thucydides plays a new, different version of the old game, a version based on writing instead of orality, and in the process invents what we today learn to call “history.” It’s always a wonderful, stunning moment for my students when I tell them that Thucydides did that without using the word historie.

Why? Well there are many ways to answer that question. One important one, I believe, is that Thucydides saw himself as playing what we can call a game with Homer, Herodotus, and received traditions about the past. In Operation KTHMA a moment will come when Thucydides himself tells my students that he wouldn’t be caught dead using that historie word--the one Herodotus uses--for what he, Thucydides, is doing. The players will have to figure out why that is in order to progress in the game. In the process of thinking it through in the context of a game they themselves are playing in relation to the past, it’s my fond hope that they will also see various new possibilities for their own understanding of why things happened, and happen, and will happen, as they do. Worth a shot, at least.
Posted by Unknown at 6:30 AM