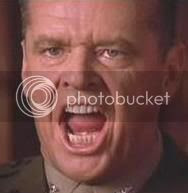 Once I’ve gotten someone—whether a fellow academic or a teacher or a parent—through their initial “You’ve got to be kidding” response to the basic idea of Living Epic, one of the issues that he or she frequently wants to talk about almost immediately is whether the values of the Iliad and the Odyssey really are values we want to be supporting in 2008. That is: even if we grant your thesis, Roger, that gamers are like bards, does that really mean that we shouldn’t be yanking the controller our of our son’s hands before he becomes Colonel Nathan Jessep?

To spin that thought out slightly, one could even stipulate that the values of the homeric epics were constructive for archaic Greek culture, but still maintain that they are destructive for our culture—that being alive in 800 BCE necessitated a warrior code, whereas being alive in 2008 CE can only be hampered by one.

For some reason, I always hear Stephen Colbert respond to this one in my mind, “Why do you hate America?” It’s not unimportant, I think, that a very large number of people in our society, and a much larger number in the human species, haven’t got over the idea that martial glory and the use of force to obtain legitimate ends are practices worth transmitting to the next generation.

But I think we’re probably better off to leave Colbert and those he parodies (Victor Davis Hanson springs to mind, just because VDH is a classicist by training) on their high conservative horses, and, because it results in a more comprehensive argument, to look at it from the liberal, pacifist point of view. If we want a world without war, how can we possibly value cultural forms that glorify violent acts?

Some very important ground has already been gained, I believe, when we have this discussion rather than (or perhaps in addition to) the subtly but crucially different one about whether video games that feature violence do or don’t make gamers more violent. When we take the ancient perspective on the matter, I think we can see that a full discussion will involve a process of critical thinking that can’t help but benefit us, even if we should conclude at the end of it (thought I doubt this will be our conclusion) that we have to take the controller out of the gamer’s hands forever, rather than just in certain very limited situations like age-inappropriateness. It’s hard to argue that learning about archaic Greek culture, and the way that classical Greek culture received it, is an unhelpful thing, quite apart from the fact that thinking in these terms removes at the outset the edge of hysteria that still seems to cling to discussions about video games.

So I think we have to go in two directions: first, the critiques of violence levelled by the bards themselves; second, the Plato/Aristotle divide on the matter of tragedy. I’ll treat the first direction now, and leave the second for another post (suffice it for now to say that Plato wanted to toss all of homeric epic and Athenian tragedy out because it made people bad, while Aristotle thought that that same material actually made people better).

Both the Iliad and the Odyssey contain glorfications of violent military prowess; both arguably also contain glorifications of atrocities (Achilles’ needless slaughter of Trojans, Odysseus’ cruel execution of the serving maids). These works, however, as they have come down to us, which we should be careful to note is not the form in which they would always have been experienced by their original audiences, also have some of the most subtle and moving condemnations of needless violence, and some of the most resonant probing of the concept of glory upon which their entire traditions are based. Achilles’ refusal to fight, the basis of the Iliad as we know it, and Odysseus’ encounter with a regretful Achilles in the underworld, the heart of the Odyssey as we know it, are only the most obvious examples.

As I said the last time I wrote on this theme, the idea that glory is hollow is meaningless without the idea of glory. If we’re going to have the idea of glory, we’re going to have such things as homeric epic and violent video games. I would argue that this doesn't just apply to Call of Duty, but also to Grand Theft Auto and Far Cry 2, which don't seem on the surface to be about the same things, because, as the Odyssey also shows, what happens in war begins and ends at home.

If we’re lucky, we’ll also have bards who show us Agamemnon’s folly, and Colonel Nathan Jessep’s misplaced honor, and the way that Africa always wins. That last example links to a brilliant post by Tom Armitage that demonstrates, conclusively to me, that games are now levelling the critiques we need them to level so that we can go farther, just as Athens needed the embryonic critiques of the bards to make it to the full-throated ones of Aeschylus, Sophocles, Herodotus, Thucydides, Euripides, Plato, and Aristotle, none of whose works would have existed without the bards, their warrior-code, and their critique of it.

Do we need the ideas of glory and honor, though? Would we be better without them? Reasonable people can perhaps disagree about that, but I’m hopeful that some number even of my fellow liberal academics would be hesitant to expunge those ideals from our ideology, if only because so much of our past would become incomprehensible without them.

Ah, but does that mean we should allow our children to be indoctrinated in those ideas? No. But I’m surely not the only liberal academic parent who’s seen that honor and glory are quite possibly the best ideas we’re ever going to find to temper the ineluctable need to fight. Even mercy and peace have value only in opposition to that need. That’s just Saussure 101, I suppose—but then, if you don’t accept the semiotic gospel according to Saussure, you probably weren’t worried about honor and glory in the first place.