The (non) choice of Achilles, or Not killing Andrew Ryan

This is a post in a series expressing the essence of my argument about how video games are actually ancient, how they reawaken the anicent oral epic tradition represented above all by the epics of the Homeric tradition, the Iliad and the Odyssey. The earlier posts can be found in the “Living Epic: The Main Quest” list on the right. Note that this blog is aimed at an audience that includes non-gamers; I apologize for boring the gamers in my audience by going over such things as the basics of game genres, but I hope they might want to see that as an opportunity to print my posts out and give them to their non-gaming parents, teachers, and spouses. 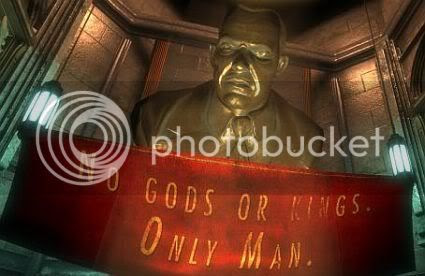 To understand this next bit you need to know a little about the ninth book of the Iliad, which is one of the most famous and influential passages of all Western literature. Both the Iliad and the Odyssey are divided into twenty-four separate books. These books didn’t become formalized into “books” until the epics were written down, probably some time in the 700’s BCE, but there’s reasonably good evidence to suggest that a bard might have sung for an evening’s entertainment just about the same amount of stuff as is in a single book in the epics as we have them. By Book 9 of the Iliad, things have become pretty bad for the Achaeans (those are the guys usually called “the Greeks”—the ones who have come to Troy to get Helen, the wife of one of their number, back): their greatest warrior, Achilles, the son of a goddess, has refused to fight for several days now, and the Achaeans are losing ground very quickly. Agamemnon, the overlord of the Achaeans and the guy at whom Achilles is pissed off, finally gives in, and authorizes an “embassy”—a delegation, basically—to go to Achilles and offer him fabulous wealth if he returns to battle. In the book as we have it, three ambassadors, Ajax, Odysseus, and Phoenix are sent. Achilles, who is (not coincidentally) singing epic to his friend Patroclus when they arrive, responds (long story short) with these immortal lines:

My life is more to me than all the wealth of Troy while it was yet at peace
before the Achaeans went there, or than all the treasure that lies on
the stone floor of Apollo's temple beneath the cliffs of Pytho.
Cattle and sheep are there for the thieving,
and a man can get both tripods and horses if he wants them,
but when his life has once left him it can neither be gotten nor thieved back again.
For my mother Thetis tells me that there are two ways for me to meet my end.
If I stay here and fight, I shall not return alive but I shall have imperishable glory:
but if I go home my glory will die, but it will be long before death shall take me.
To the rest of you, then, I say, 'Go home, for you will not take Troy.'

So that’s why Book 9 of the Iliad is cool. Now let’s imagine that we’re in a bard’s audience something like twenty-eight hundred years ago. When a Homeric bard went to sing what he might well have called “The Embassy to Achilles” (because obviously there was nothing called the Iliad then—there were just a bunch of different stories you could tell about a place called Ilium [what we call Troy]), he was not singing it exactly as he had sung it before. Instead, he was re-composing it for the immediate performance occasion. He knew the way the story was supposed to go (maybe he had been the one to come up with the particular story he was going to sing), but for several reasons, perhaps most importantly that audiences always like something new, he made it up anew every time he sang it.

Now a bard who was singing a part of the big story called “The Wrath of Achilles” (what we know as the Iliad) couldn’t change the fact that Achilles comes back to battle, eventually to die. But he could most certainly change the way that coming back went down. At some point, one bard did, and came up with the immortal lines I quoted above about what’s been known forever after as the Choice of Achilles.

But that means that the Choice of Achilles actually isn’t a choice at all, because Achilles can’t leave, any more than the main character of Bioshock can leave the underwater city of Rapture before the end of the game. (This is what I meant about sandboxes and rails, by the way.)

I don’t want to spoil Bioshock for anyone, so if you haven’t played it and are planning on playing it, stop reading now, finish the game, and come back. I’ll wait.

Now that you’re back: remember that moment when Andrew Ryan tells you to kill him? Isn’t it strange that you absolutely have to do that, or the game won’t proceed?

Here’s the thing. The relationship of the bard to the (non)-Choice of Achilles is exactly the same as the relationship of the player of Bioshock to killing Andrew Ryan. Ken Levine, author of Bioshock, and the Homerid who came up with the Choice of Achilles were both saying something really, really important about free will, which could only be delivered by exposing the way things that seem like choices really aren’t choices at all, most of all when it matters most.

Next time: Am I actually saying that Bioshock is as profound as the Iliad?
Posted by Unknown at 5:39 AM