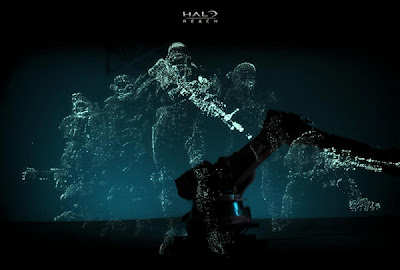 The scarcity of ammunition dominates the campaign of Halo: Reach, at least for a non-elite player. This domination is entirely ludic: as the player depresses the triggers of his or her controller, the amount of available ammo goes down very quickly in relation to the toughness of the enemies around Noble 6, the player-character.

Noble 6 is always, always, running out of ammo. No powerful weapon, like a rocket-launcher or en energy sword, ever lasts for long; semi-powerful weapons like the Designated Marksman Rifle (DMR) and even the Magnum are in constant danger of becoming useless; even the lowly Assault Rifle often has to be exchanged for a Needler or the even lowlier Plasma Pistol. Not infrequently, the current checkpoint has to be abandoned simply because there's no more ammo on the map—not something that's ever happened to me in a game before. Indeed, and more importantly, I don't think I've ever experienced a ludic situation more in tune with the themes of its game: this is desperation conveyed subtly and pervasively, through every facet of the practomime. (It is very much worth noting that the Plasma Pistol, in the hands of an expert, is not lowly at all; such an expert will not experience this game-dynamic as I describe it here, though perhaps the ludic design of the AI and of the firefight scenarios may work for him or her as I describe them in this post.)

The nature of game-design dictates that wide variation in the hegemony of ammo-scarcity is possible in individual performances by individual players. Much of what I write here is in fact simply inapplicable to very good players of Halo, especially as regards the availability of adequate weapons and ammo. A superb player, even playing the game on Legendary difficulty, for example, will possibly never run out of ammo. A very large range of performances of the practomime of the campaign, though, by players of average ability, will I believe be fundamentally and thematically shaped by the scarcity of ammunition.

The constant running out of ammo goes hand-in-hand with two other ludic features of the game: the toughness and evasive abilities of the AI enemies and the frequent use of the firefight scenario with its waves of enemies. I want to suggest that these features together create a practomimetic meaning effect between ludics and narrative, by forcing players to perform the epic deeds I wrote about in my last post not only as power-fantasies (of which, of course, every form of epic, from Gilgamesh on, is full) but as complex enactments both of power and of its frustration.

As I wrote in my last post, the narrative shape of Reach traces the same kind of outline that's traced by many of the fossils left behind by oral formulaic traditions—including the homeric one. By itself, though, that outline does not make Reach—or any game—"epic" in a sense that's helpful from an analytic perspective. Only the living performance of the game by the player can do that—and that living performance is governed by mechanics like scarcity of ammo.

By that definition, to be sure, it might seem that no epic set down in textual form qualifies, since textual epic seems not to allow for live, improvisatory performance. But in fact the Iliad, the Odyssey, and the Aeneid are like video captures of superb performances of a game like Reach. In being records of actual performances according to the rules of the epic tradition—even if those performances were never delivered orally, since written composition also constitutes performance—those texts present enactments of their respective practomimes.

Those epic texts have lost the living element of the tradition whose performance they record. Nevetheless, the players of the traditions (the anonymous bards who composed the final forms of the homeric epics; Virgil, consummate player of the classical epic) rendered them living in the performances there recorded. So too does, for example, any novelist or film cast-and-crew render their practomime living when they write and shoot it, though (and this is crucial) in novels and films the final audience has access only to the fossil. That audience may then bring novels and films alive through re-performance (cf. the kids who did a shot-for-shot re-make of Raiders of the Lost Ark and Pride and Prejudice and Zombies [with the undead presenting a piquant irony, by the way]), but the nature of those forms locates audience performance after authorial performance and not inside and in place of it it, as in epic and games.

Reach, on the other hand, without its player, is an epic waiting to happen, a set of ludics waiting to be given enactment. More than any other comparison I could make, I think this one points out the value of thinking about games like Reach in the light of epics like the Iliad: these two kinds of practomime share the enormously important characteristic of living through re-performance, of gaining their meaning through iteration according to the rules laid down by the practomime.

The Iliadic warrior code, as expressed in the twelfth book of the Iliad--to kill or be killed, to gain the κλέος or to yield it to others—is explicitly related to the practice, and the ludics, of epic. The rules that govern the relationship between the bard's re-composition of the tradition in performance and the effect of that peformance, either on some lost epic occasion or on the text-Iliad we have include above all the rule that a warrior becomes a hero by gaining κλέος, and that he gains κλέος by killing opponents and taking their armor. κλέος, in turn, is as close to a win-state as the Iliad has: not only is the bard giving it to the heroes of epic, but, as the Odyssey makes plain in its depiction of bards, he is trying to win it for himself, in reciprocity with his heroic characters.

So when Achilles personalizes the warrior code into the horns of his ethical dilemma (life or κλέος, in a world where honor is meaningless), the themes of the Iliad itself—honor, death, glory, suffering—have everything to do with the practice that has given rise to it, and the ludics of that practice.

Halo's modern warrior code, as expressed over and over in the orders given to you both by characters and by the game itself (orders like "Defend Dr. Halsey") is to shoot those you have been told to shoot because the world must be saved. Just as the rule-based practice of the Iliad perpetuates the Iliadic warrior-code, the rule-based practice of Reach perpetuates Halo's: the code is explicitly related to the basic rules of its practomime, which in this case are the common dynamics of the shooter—quite simply, the next thing in the game won't happen until you have shot all the enemies you need to shoot in order to reach the necessary game-state. In cases where the ludic situation turns on activating a switch or reaching a certain point in the game's landscape, the player must of course shoot the enemies that stand in the way of his or her player-character.

The necessity of shooting enemies to reach the end of a scenario has no thematic, let alone narrative, meaning in itself. Halo's warrior code gives it that meaning by attaching specific orders to the rules. (I happen to think that such thematic and narrative communications as these orders expressing the code of Halo could also be characterized as a set of rules, but it's not of great importance that we look at it that way, so long as the integration of the thematic/narrative and the ludic is recognized.)

This is where the AI and especially the firefight scenario come in, because firefight expresses Halo's warrior code with an additional bundle of rules that dictates that waves of enemies attack the position being defended by the player-character, each wave more difficult to destroy than the last. At the same time, the incredible AI of elites and brutes ratchets the intensity of these waves higher and higher. I mean "incredible" with some precision; the effect produced upon the player is of disbelief that his or her game-mechanic-controlled enemy has eluded and defeated him or her.

These too are at base standard FPS dynamics (in fact, they're video game dynamics as old as Space Invaders); in the campaign of Reach, though, the sheer frequency of firefights, their integration into the unfolding of the narrative, and their thematic resonance with the campaign's narrative of last-ditch, doomed resistance makes for a ludonarrative consonance that casts the player as the forced savior of humanity.

There's an obvious comparison to be made with Hector of Troy, whose very name means "Holder" (Bungie obviously doesn't have a lock on overdetermined names like Noble 6). Hector's expressions of the warrior code, which were once upon a time recompositions of the Iliadic tradition, stand in contrast to Achilles', creating the conflict of identification that gives the Iliad a great deal of its power. Hector is holding out against the Greeks who out-number him; his death, and his funeral at the end of the Iliad, like the death of Noble 6, is a mechanic of the tradition, as he himself acknowledges over and over. This Hector comparison will I hope someday lead me to a comparison of Reach to Halo 1-3, and of Noble 6 to the Master Chief, since it seems that 6 perhaps plays Hector to the Chief's Achilles, but I'm afraid this post is already a monster of Odyssean proportions.

Scarcity of ammo, enemies who seem to outwit the player, and firefight together make the player's performance of Halo: Reach a practomimetic enactment of the same doomed, glorious heroism I described in my last post. These ludics, as I've said, are not innovative, but as in previous games in the series traditional game-design features are deployed in such a way as to create a practomime that is shaped by, and in turn itself re-shapes, ancient themes that seem unlikely to leave world culture any time soon. We can deplore their presence; we can eschew their performance; but it's worth noting that while Plato threw Homer out of the Republic he would probably have let Halo in: armed conflict was a fact of life for him, as it is a fact of life today, and Homer's practomime is only tossed out because his heroes aren't, well, noble.
Posted by Unknown at 6:33 AM