The table and the screen: a curious resistance 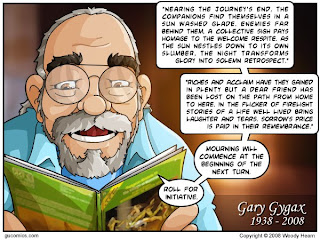 I've seen it frequently enough both in myself and in people I'm talking to—notably my students and my classicist colleagues—that it no longer surprises me. People who haven't spent time studying games seem to have a fundamental resistance to the nearly self-evident idea that video-gaming, or, as I've taken to calling it, digital practomime, is fundamentally the same thing as tabletop-gaming. Or, as Pete Border (whom I don't know except through this one post) put it in a post on the GLS Educators' Ning, "If a game isn't fun with everybody in a room playing it on a table, adding a computer won't help it."

It was a major breakthrough for me, which only occurred over the course of several months, to realize the absolute truth of the notion that ludic practomime (i.e., game-playing) doesn't really change in the essential elements of its construction of meaning as it goes from the Monopoly board, or paper-and-dice RPG's, or Live-Action Role-Playing, or even live-action sports, to those things' digital versions in what we usually call video games.

Just as that other kind of practomime, storytelling, is recognizably the same thing between book and computer screen, and even between oral composition and textual book, and even between book and film, the more obtrusively interactive kind of practomime that we call games is the same thing between table (and dice, and books, and board, and field) and screen. Which is not to say that books and movies themselves are the same--rather that storytelling as an act is consistent between them.

There are obviously things you can play easily on the screen that would be very difficult, if not impossible, to play on the table. If someone were able to drop objects of certain stereotypical shapes from a height down to you, and you were able to rotate those objects as they fell so that they fit together as efficiently as possible, it would be Tetris, and be recognizably the same as Tetris on the computer screen. But of course, as even the famous video of Live Action Tetris makes clear, Tetris is a game that's not possible in the physical world. Nor is it practical to get your friends to wear mushroom- and turtle-suits so that you can try to jump on them, a la Super Mario Bros., although it would—obviously, I think—be fun if it were possible.

And there's no question but that the integration of the verbal with the visual and the manual, and even the visceral, that comes in video games, along with the opening up of possibilities like jumping on Goombas and Koopas, has a role in our seduction into thinking that it is video games that are revolutionizing the way we think about art and education and even culture itself. But I don't think that the sheer impact of that integration, or those possibilities, can fully account for the resistance we find to seeing games (or practomime) as a single art form between table and screen.

So what does account for this difficulty, and why does it matter?

To a classicist trying to develop a field that I'm thinking of these days as "applied classics," the table-to-screen shift looks rather like the oral-to-written shift that leaves legible marks on the remarkable culture of 5th Century BCE Athens, in the works of the tragedians (Aechylus, Sophocles, Euripides), the historians (Herodotus, Thucydides), and the first philosopher, Plato. I could go straight back to Plato's cave, and then add a soupcon of the Phaedrus, to say that Plato was trying among so many other things to get people to pay attention to the bad things (and the good) about the changeover, but I'm sure you're sick of me on the cave by now.

Instead, let me point to Thucydides' hope that his work, by taking full advantage of the technology of writing, would become a possession forever, a ktema es aei, as opposed to what he saw all around him, contest-pieces for immediate hearing—that is, for oral delivery and auditory reception. Thucydides was clearly including Homer and Herodotus among those whose work would not survive, or at any rate would not be useful for future generations. Similarly, my students seem to think of their gaming as occurring in a world apart from the world of tables and classrooms.

(The ktema es aei passage has a very great deal to tell us about practomime, and I plan to come back to it soon, because the "contest-piece" side of the equation is also the practomime side of the equation, as opposed to cultural material like textbooks and [traditional] courses. Deconstructing that opposition has, I think, a lot of potential for understanding the power of practomime in culture.)

But Thucydides' resistance to seeing the traction that oral composition has over our relation to the past is also closely analogous to our characteristic failure to see that a Dungeons and Dragons module and DragonAge: Origins are fundamentally the same thing. Playing pretend on a tabletop in the "real world" is in crucial ways the same as playing pretend in a digital medium. Thucydides is seduced by the textual as we are seduced by the digital. (Plato, notably, is not seduced this way, and his ability to break through the resistance to seeing the continuity of oral and written—and thus also the actual discontinuities—is perhaps what permits him to formulate the cave.)

It's important to fight against this seduction, I think, for at least two reasons, one of them metaphysical and the other eminently practical.

Metaphysical first: if we fail to grasp that digital practomime (i.e. the video game) is a continuation of tabletop practomime, we lose an opportunity to see the practomimetic construction of "reality"—or, to put it in my usual terms, we fail to learn the lesson of the cave, and instead simply become more deeply implicated in the unnecessary fetters that Plato so vividly put on his prisoners' limbs.

To fail in this way is analogous to failing to see that the Matrix trilogy is about all of culture, not just about digital culture, and to failing to understand that Facebook is an extension of "real-world" social relations, not a new way to relate to other people. As a teacher of the Humanities, I see an urgent need for my students' cultural competency and for my own career-survival, to persuade the world of the truth that the "real" world is as virtual as the online world, and always has been. Such an understanding would make clear for example that terms like "the digital humanities" misunderstand both our opportunities and our challenges.

Practical next: if we fail to see that we can do practomime with nothing more than our imaginations and our voices, and can build the technology up from there, and that e.g. Googlewave is easily a more powerful technology for practomime than any currently functional 3D digital world, we lose an extraordinary opportunity for doing culture, whether we call our practices—that is, the culture we do—art, or education, or even entertainment.

I would really like to see more teachers, yes, playing around with the possibilities both online and off-, both digital and physical, both table and screen, of the huge strides people like Jim Gee and Kurt Squire have made in studying what video games tell us about learning. I would really like to see more developers understanding the implications in this area of the explosion of social games, which seek to obscure the connection between the table and the screen even as they trade on it (how else to characterize the constant updates about Farmville and Bejewelled, that use your friends as marketing materials?). Also, though, I would really like to play more practomimes that take me back and forth from physical to digital. Like Wii Fit. But with gods and monsters.