Operation KTHMA: handing over the reins 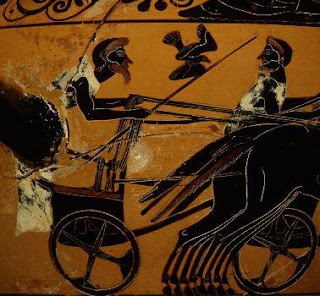 See this hub for a guide to my posts on Operation KTHMA.
Here's what I uploaded over the weekend to the KTHMA team. The idea of requiring the students to start telling the story, as engagement and as assessment at the same time, comes partly from the HoneyComb Engine and partly from some comments helpful readers made on earlier posts.

The Demiurge advises you that it has become clear to him that the situation is worse than he thought, and the danger to Western Civilization greater. Because of the continuing diminishment of the imaginative exploration of the past in the general population, the TSTT cannot function as intended, and requires more input of psychoporeutic energy than the KTHMA-team has yet been able to generate. (The Demiurge recommends that if the operatives have seen the movie Elf they make the analogy of Christmas Cheer and its role in the flight of Santa's Sleigh to the role of psychoporeutic energy in the function of the TSTT.)

The Demiurge does not plan to take this dire state of affairs lying down. This mission will achieve its objectives if the Demiurge has anything to say about it, and so the Demiurge has resolved to attempt a desperate experiment, and he requests the KTHMA-team's assistance, although he knows it will demands a level of mastery the team has not yet achieved.

Specifically, the team will need to boost its Vitality signifcantly, in order to get the answers we need about the meanings of Herodotus and Thucydides. In practice, this will mean merging each class' Athenians into a single Athenian of that class, a sort of classics superman, and taking a greater degree of control over the TSTT's imaginative function than the team has yet taken.

The Demiurge has already laid the groundwork for this new responsibility in instructing the TSTT to reformulate your secrets. Now, as the mission proceeds, the KTHMA team will take the next step by demonstrating their growing mastery of Greek historical writings in preparing to imagine, and then, in mission-session, actually imagining parts of the action biotized by the TSTT. That is, to put it in clearer real-world terms, you will be responsible for creating chunks of the mission-action, and thus adopting the role of the historical writer. As you create, you may narrate any action of the plausibility of which you can convince at least half the KTHMA team.

This new responsibility will work as follows. The Demiurge will notify you in session and on HuskyCT about what will be happening in Athens in upcoming sessions. When you are doing your pre-session reading, you will also mine both the section you are currently reading and the rest of the texts available to you in Herodotus, Thucydides, and any other works such as Plutarch, tragedy, Aristophanes, and Plato that you wish to bring in, for ideas about what information needs to be obtained in the upcoming encounter in relation to your class-team's goals in the interpretation of history. In your class-team forum, and in brief in-session team-meetings, you will agree upon what you hope to accomplish in the upcoming TSTT session.

The central idea behind what you narrate will be to advance your class' idea of what historical writing is about by accomplishing your class' in-Athens goal, and at the same time defending your secret from the "damaging" textual information supplied by the TSTT as a psychoporeutic stimulant. The Demiurge will discuss how this works with you in your team-forums, and will always assist in the in-session narration when you request assistance.

The rewards for demonstrating your mastery at analyzing Greek historical writing will be twofold: first, the usual experience points that contribute to your class-participation grade in the mission's course-cover; second, as you make your psychoporeutic contributions you will gain in Vitality, which will in turn advance your Stage rating; that advance will earn unique awards of honor in the Demiurge's Hall of κλέος.

The Demiurge advises you that even if you do not manage to prepare for a given mission-session, there are still experience points to be gained from showing up and contributing, though obviously it will be possible to win more experience points by making more deeply prepared contributions.

Along with that briefing, I also uploaded new instructions for each class, specifying their worldviews further and suggesting ways in which their view of how history should work, and what it should do, might differ from the other classes. Yesterday I informed them that after they were done in the Athenian assembly (where they'll get to see the debate in which Athens decides on war), they would be going to court, accused of breaking and entering. I gave each class-team a different text to mine for the necessary data, for example Xenophon's Apology, Plato's Apology, and Aristophanes' Wasps, all key texts for our understanding of the Athenian legal system, and thus the development of rhetoric during the end of the 5th Century BCE.
And, in a step that's really only vaguely related to the game but seems to me to have been enabled by it, I've made their research paper optionally collaborative, with all collaboration to happen in the KTHMA discussion forums. I've grown less and less happy about the college-class paper as a form over the years, though my belief in the importance of teaching writing and the critical thought that goes with it has never wavered. Since at least four of these class-teams have formed themselves into functional collabroative units, and the fifth shows enough spark that I don't despair of it, it seemed worth giving a collaborative model for a research paper a shot.
Posted by Unknown at 6:32 AM