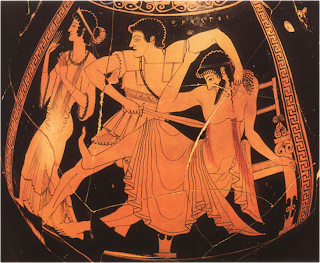 
Last Wednesday, the KTHMA team (that is, the students of CAMS 3212) tried out the logagonistic system for the first time in an encounter with their Athenians' old school-teacher. The logagonistic system is the equivalent of the combat systems to be found in many kinds of games, role-playing games (RPG's), whether tabletop or digitally-mediated, in particular. The system is based, to the extent I've been able to do so, on Corvus Elrod's Kiai-Megill Variant (KMV) of his HoneyComb Storytelling Engine. (My difficulty in using Corvus' engine is that we're all still eagerly awaiting its actual release, and so my own efforts are in fact based on my reconstructions from his sometimes cryptic posts about it.) On Friday the operatives (that is, the students) began an encounter that continued yesterday, with a minor tragedian.


The basic idea of the KMV, and of logagonistics, is of verbal contest. At the key moments of the course-game-story, the operatives have conversations. In those conversations the operatives discover the information that allows them to achieve course/game objectives. In their broad outlines, these conversations are played according to a game-play model that closely resembles the combat system to be found in games ranging from paper-and-dice RPG's to action games like Prince of Persia.


The genius of Corvus' idea for the KMV is in my opinion the use of a secret kept by each character in a conversational encounter as the measure of that character's distance from a failure-state. Once a character's secret has been revealed, the character is defeated; players of RPG's and many other kinds of game will recognize that the secret is thus a stand-in for "Health" or "Hit Points." In the KMV Corvus also uses the device of a suspicion for each character; I've elected to let the operatives form their own suspicions and follow up on them.


When I first considered the idea of the secret, I wondered whether it might not be too restrictive to allow the encounter to feel representative of a real conversation. A thought of the way we accept the pressing of buttons and the accompanying onscreen action as the swinging of a sword or the casting of a spell, however, made me realize that as those things are metonymies of real action, so secrets are metonymies of the real interpersonal dynamics of a conversation. It's hard to put into words how strongly the atmosphere of a KTHMA session demonstrates the truth of that realization.


Before the encounter with the schoolteacher, I gave each class-team a secret by posting it in a briefing only visible to that team. I must admit to having had fun devising these secrets, precisely because of the two constraints I put on myself: To put it another way, I wanted every secret to tie back into the goals and objectives of the course. It feels to me like it's worth noting that here again instructional design and game design seem to intersect: in an engaging game, game-mechanics like secrets need to be integrally tied to the player-objectives of the game. Unfortunately, I'll have to be vague about these secrets until one of them is revealed, but they tie the operatives' Athenian hosts into the history of Athens in the 5th Century BCE in ways that I at least think are fascinating; maybe more importantly, having those secrets has made the students do and share research on the period in a way I don't think they ever would have otherwise. I've told the operatives that the rewards for guessing another team's secret will be great.


Logagonistics occurs in a rudimentary turn-based system, upon which I improvise as the occasion warrants—for example, even if it's not the NPC-opponent's turn, strictly speaking, if the teams have got too bogged down in considering their next moves, I'll have the NPC launch an attack. On the operatives' turn, each team rolls a die; highest roll goes first. On each turn, the class-team has three options:
In turn, at least thus far the NPC's have only simple attacks: I roll for the NPC to determine which team he or she is going to attack; I roll again, and on a five or six the NPC reveals a part of that team's secret. (Each team has previously communicated to me what piece of their secret will be revealed on a hit; they've discussed in their team-forums how to subdivide the secret for that purpose.) When the schoolteacher Geromenes hit Class 4 last Wednesday, the tension in the room was palpable—unlike anything I'd ever experienced as a teacher.


I'll leave you hanging as to the very significant encounter with Charicles the tragedian, but the logagonistic encounter with that schoolteacher was over quickly. The operatives, as their Athenian hosts, found the house of Thucydides son of Melesias (that name is important, but not for the reasons I imagine you're thinking, and for which I think almost all the students are thinking it's important), where they had had their early education from a slave named Geromenes. He was just finishing up a lesson about the first book of the Iliad, and he greeted them happily, but with a shadow behind his smiling eyes. (Gotta love narrative shortcuts.)


The encounter opened: the operatives asked why Geromenes seemed so guarded. Class 5 missed with their class skill, Lyrical Fancy. Then Geromenes, suddenly defensive, landed his attack on Class 4: he studied their faces, seemed to remember something, and said, "Wasn't your father involved with the law, a few years back?"


Class 2 then went all in on their Objectivity skill, and spent every point they had for Mission 1 (which would soon be over, admittedly) to get an automatic critical hit. "How can you teach children these homeric stories of heroic glory when they're so clearly bigoted tales of Greek prowess?" I told them they asked.


Geromenes broke down, weeping. "I'm sorry! I'm sorry!" he cried. "This is my secret shame! I taught all of you your Homer for so many years, and now I'm afraid that war against Sparta is coming, and you'll all do what you learned—you'll all fight, and die, in a pointless, bloody conflict. I know that some of the men are preparing to send their sons away—I beg of you, think hard about it!"
Posted by Unknown at 5:50 AM