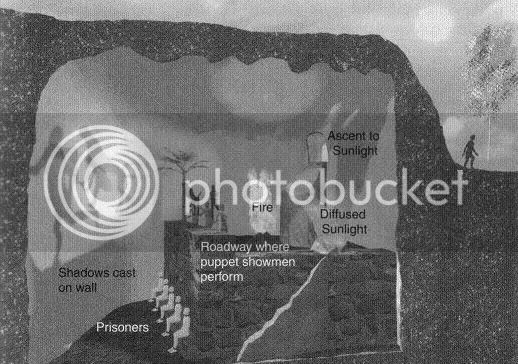 This post takes us from homeric epic to a key moment of its reception in classical Athens, Plato. In it, I begin mini-series about Plato’s cave that’s pretty much a more fun version of a chapter I’m writing for an IGDA volume. Here’s what you need to know starting out:

1) Plato loved Homer—the sheer number of quotations from Homer, made in passing by Socrates and others, almost always provided to give unquestionable support to a commonly understood point, proves that beyond the shadow of a doubt.

2) Plato hated Homer—the sheer number of times Socrates tells us, especially in Republic, that Homer (whom he thought of as a single person, though at this blog we know better) was pretending to be something he was not, proves that beyond a shadow of a doubt.

3) Plato kicks Homer out of the ideal city in Republic on the grounds that his poetry does what Plato calls mimesis. Most people translate mimesis “imitation,” but I would prefer to translate it “identificative performance.” If you want to jaw about that, let’s do it in the comments. In any case, one of the things I’ve been trying to do in the Main Quest is show that that kind of identificative performance is also what we usually call “immersion.”

Plato’s idea, put forward in Republic, is that if you pretend to be somebody, or watch others pretend to be somebodies, you will become like them. For Plato, this power of mimesis presented dangers that, when he wrote Republic, seem to outweigh any possible positive impact. Looking at Plato and video games together, then, can be a way of looking at an essential question in video game criticism: How can, and how should, immersion fit into the rest of culture?

Even a brief look at Plato shows us that that question is both very old and very contentious from its beginning. Looking a little closer will do two things, I think—add complexity to our discussion of what video games are up to in our own culture, and give us some traction over that complexity.

Socrates: I said, “ . . . if they [that is, the prisoners of the cave] were in the habit of conferring honours among themselves on those who were quickest to observe the passing shadows and to remark which of them went before, and which followed after, and which were together; and who were therefore best able to draw conclusions as to the future, do you think that he would care for such honours and glories, or envy the possessors of them? Would he not say with Homer, “Better to be the poor servant of a poor master, and to endure anything, rather than think as they do and live after their manner?”

“Yes,” [Glaucon] said, “I think that he would rather suffer anything than entertain these false notions and live in this miserable manner.”

“Imagine once more,” I said, “such an one coming suddenly out of the sun to be replaced in his old situation; would he not be certain to have his eyes full of darkness?”

“And if there were a contest, and he had to compete in measuring the shadows with the prisoners who had never moved out of the den, while his sight was still weak, and before his eyes had become steady (and the time which would be needed to acquire this new habit of sight might be very considerable) would he not be ridiculous? Men would say of him that up he went and down he came without his eyes; and that it was better not even to think of ascending; and if any one tried to loose another and lead him up to the light, let them only catch the offender, and they would put him to death.”

It’s important to remind ourselves (and it will be even more important down the road) that Republic is Socrates’ first person narration of a very long day he spent at a friend’s house. The great dialogue—perhaps the greatest philosophical dialogue ever composed—is thus itself an identificative performance, a mimesis. More, it is a mimesis of a dialogue, which according to Plato’s own scale of harmfulness in Book 10 of Republic should be about as bad as representation can get.

The familiar myth of the cave, that is, is a mimesis in a mimesis in a mimesis. It finishes with the above passage, in which I contend Plato becomes the first video game designer. My point, as this mini-series develops, is going to be that the game of the cave—the competition for honors in commenting on the shadow-puppet play—gives us a framework for evaluating video games’ cultural potential and for shaping their cultural effects.

Even the choices, for example, of a game like Star Wars: Knights of the Old Republic(KOTOR) (often praised, of course, like other Bioware titles, for its “openness” in allowing the player to choose different ethical paths) appear from the perspective of the cave-game not to matter at all, since, like the honor-contests of the cave, the choices of the game are bounded by the game. We can argue with Plato on this score—as Aristotle argued with him in Poetics—but it’s hard to deny that whichever ending you finish KOTOR with, you’ve come to power and brought order to the galaxy. Light or Dark, you have reinforced a key part of a dominant ethic. While the cave-game doesn’t exhaust, by any means, the expressive power of KOTOR, it gives us a compelling index to its ethical dimension.

On the other hand, the relationship of the cave-game to the main point of the myth of the cave—philosophic education—tells us that there is in fact a way in which game ethics might be made to matter in culture: by making them disruptive. The ascended man is put to death, as Socrates was put to death, but look at the game Socrates is playing now: a game called Republic.
Posted by Unknown at 7:34 AM